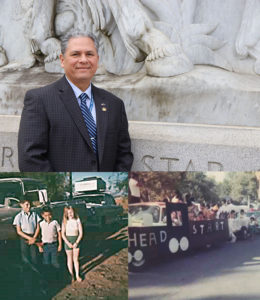 Oregon Rep. Mark Meek has happy memories of being in a local parade when he was a four-year-old Head Start student in Roseville, Calif.

While the legislator, who represents parts of Clackamas County, doesn’t remember the reason for the parade, the stability of school was significant for him. Meek’s father had returned home from serving in the military and was working as a truck driver. His family of five, which included a younger and older brother, was facing challenges. “We all got to sit on the float and wave for the parade goers,” he said. “It was an amazing experience… I remember a lot of the parents volunteering to decorate the float (pulled by my uncle’s truck) and how excited we all were to be part of this community event.”

“My mom and dad started dealing with the effects of PTSD,” he said. “There were times when my dad wouldn’t be home.”

Launched in 1965, the Head Start model was designed to support families facing difficult circumstances and reduce obstacles to learning in the early years. Today, Head Start continues to provide health, nutrition, and school readiness to families. Knowing he had a meal to depend on at school was reassuring for Meek.

“There were times during the month we didn’t have milk or cereal,” he said. “Over the weekends were really tough.”

Meek’s parents later divorced. This event sparked a series of moves and further threatened Meek’s stability as a young child. Meek said he lived in three states, 12 different cities and attended 18 different schools “that I can remember” between kindergarten and fifth grade.

“If I hadn’t had that background and early exposure, I would have struggled much more,” said Meek. “This experience was life changing,” said Meek. “Over the years, as I reflect on the wonderful learning experiences I had, Head Start was the foundation for all my other learning opportunities.”