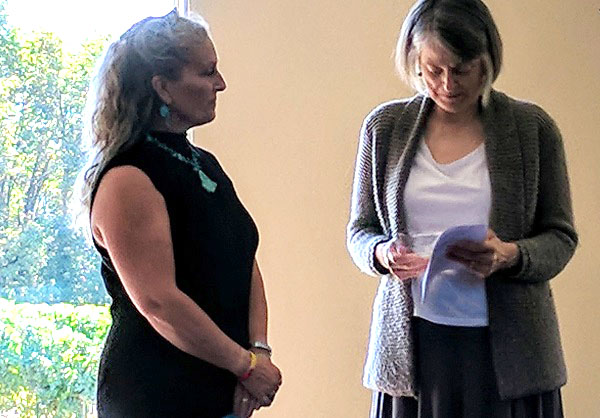 The Early Learning Council announced today the two recipients of the 2017 Lynne Angland Award. The Lynne Angland Award recognizes people and organizations who improve safety, quality, affordability and access to child care in Oregon at both the state and local levels.

Lynne Angland was a passionate visionary dedicated to Oregon’s families. Lynne’s service, passion and leadership improved the lives of Oregon’s children and families, and her untimely death left a void that only her diligent advocacy could have filled. The Early Learning Council continues to honor Lynne’s commitment to strengthening Oregon’s next generation, and the Lynne Angland Award shines a light on those who contribute to improving child care and the positive outcomes for Oregon children.

This year, the Early Learning Council received a record number of award nominations for leaders in early childhood education throughout the state. With that, the Council is excited to announce that the 2017 Lynne Angland Award has been presented to Laurie Potts with the Southwestern Partnership Family Center and Lynn Anderson with the Siuslaw School Districts. Both recipients received abundant praise in their nominations and are true leaders in early learning.

Laurie Potts works with the Southwestern Partnership Family Center in Coos Bay and has been a leader in early learning for over 20 years. Her accomplishments include creating an online degree program in order to serve students all over the State or Oregon who are seeking degrees in Early Childhood and Family Studies. Potts worked to have both the degree programs and the Family Center preschool nationally accredited by the National Association for the Education of Young Children, making Southwestern only one of eleven community colleges nationwide that offer an ECE AAS degree online.

The nomination for Laurie Potts reads: “For twenty years Laurie Potts has been developing programs for the purpose of making the world and our community a better place. She provides outstanding service to the community as an innovator, contributor, and heroine. She has promoted education for college students, families, and quality care and education for children, and touched the lives of countless students, old and young, in our community and across the state.”

Lynn Anderson has been an inspiring leader in her community for over 25 years and in Indian Education with the Siuslaw School District. In addition to her work with the American Indian Pow Wow, Anderson and her husband have also sheltered young children and taken them to emergency care homes. Lynn has successfully written for grants to continue her programs.

The nomination for Lynn Anderson reads: “For 25 years Lynn has made the American Indian pow wow come to life. She teaches and dances with her students, creates regalia, encourages all students to know about American Indian cultures, customs, foods, story telling, history, need for health and education and strong mental security. Her 20+ years of working with students and families includes knowing where the kids are sleeping, waking them and transporting them to school, making sure they shower and eat and have clean clothes and where they will be that night. Because of her efforts more students have graduated high school.”

The awards were presented at the business meeting of the Early Learning Council in Salem, Oregon.